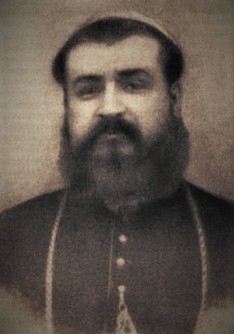 Ignatius Maloyan was an Armenian Catholic Archbishop who was trained in Lebanon, served in Egypt and the Mardin province of the Ottoman Empire. In the summer of 1915, the Vali of Diyarbekir, Reşit Bey, commenced the Armenian Genocide in Mardin. Arrested and In court, the chief of the police Mamdooh Bek ordered bishop Maloyan to convert to Islam; the bishop declined, and was beaten, tortured, chained, and imprisoned.

On 10 June 1915, Ignatius and over 400 other Christians, including fourteen priests, were force marched into the desert. When they stopped, bishop Ignatius celebrated an impromptu liturgy with scraps of bread.  100 of their number were taken by Turkish troops to nearby caves and murdered.

As he watched his priests and faithful massacred in front of him, Mahmdouh Bey, offered to spare the Archbishop’s life if he would convert to Islam. Archbishop Maloyan first vowed loyalty to the Sultan in all purely civil matters, but added, “I’ve told you I shall live and die for the sake of my faith and religion. I take pride in the Cross of my God and Lord.” This enraged Mahmdouh Bey, who ordered the column to depart for a valley about four hours’ distance from Diyarbekir. There, on June 10/11, the remaining 200 deportees were killed and Maloyan was personally executed by Mahmdouh Bey. The local population stripped the clothes from the bodies of the victims, which remained untouched for five hours until they were all collected, doused with petrol, and burned.

In this corner of the world, people of all faiths still suffer from hatred and cruelty.

Hear the prayers of those who abide with you in dangerous times and in dark valleys,

and who die with your name on their lips.

Draw them quickly to your side where they might know eternal peace.